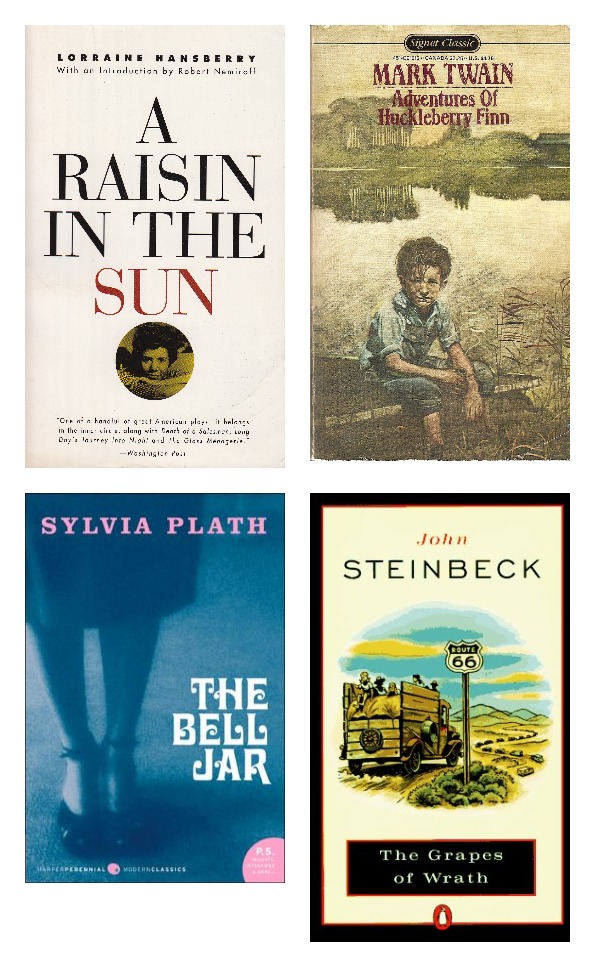 A Raisin in the Sun
Lorraine Hansberry

This live, full-cast performance of Lorraine Hansberry’s classic 1958 play tells the story of a working class African-American family living in a small apartment on Chicago’s Southside. The matriarchal Lena “Mama” Younger awaits the arrival of her deceased husband’s $10,000 life insurance check. Her son, Walter, maneuvers to invest in a liquor store, while her daughter, Bennie, hopes to attend medical school with the money. Meanwhile, Walter’s wife struggles to decide whether to terminate an unplanned pregnancy when they’re already struggling to support their firstborn. When Mama makes a down payment on a house in a white section of the city, the neighborhood association offers to buy them out. The family balks until Walter loses the balance of the money in a fraudulent business deal. Then they must weigh dreams against reality.

Adventures of Huckleberry Finn (often shortened to Huck Finn) is a novel written by American humorist Mark Twain. It is commonly used and accounted as one of the first Great American Novels. It is also one of the first major American novels written using Local Color Regionalism, or vernacular, told in the first person by the eponymous Huckleberry “Huck” Finn, best friend of Tom Sawyer and hero of three other Mark Twain books.

The book is noted for its colorful description of people and places along the Mississippi River. By satirizing Southern antebellum society that was already a quarter-century in the past by the time of publication, the book is an often scathing look at entrenched attitudes, particularly racism. The drifting journey of Huck and his friend Jim, a runaway slave, down the Mississippi River on their raft may be one of the most enduring images of escape and freedom in all of American literature.

Sylvia Plath’s shocking, realistic, and intensely emotional novel about a woman falling into the grip of insanity

Esther Greenwood is brilliant, beautiful, enormously talented, and successful, but slowly going under—maybe for the last time. In her acclaimed and enduring masterwork, Sylvia Plath brilliantly draws the reader into Esther’s breakdown with such intensity that her insanity becomes palpably real, even rational—as accessible an experience as going to the movies. A deep penetration into the darkest and most harrowing corners of the human psyche, The Bell Jar is an extraordinary accomplishment and a haunting American classic.

The Grapes of Wrath
John Steinbeck

Published in April 1939, The Grapes of Wrath became an enormous bestseller, winning critical praise from many of the best reviewers in the country. It also earned the Pulitzer Prize and was made into a film by director John Ford. Not surprisingly, the novel helped to focus national attention on the migrant situation. Popular first lady Eleanor Roosevelt supported the book, and her strong views were widely reported in the press. Soon after, large sums of federal money were directed to California to aid the migrants, and Steinbeck’s novel became a catalyst for the change in attitude of Californians themselves, many of whom had not understood the extent of the plight of the migrants.

Steinbeck had, in fact, managed to write his “big book.” The Grapes of Wrath became an instant classic, and it has maintained its position over six decades, with a readership in the millions. There are precious few “great” American novels, and this is surely one of them.