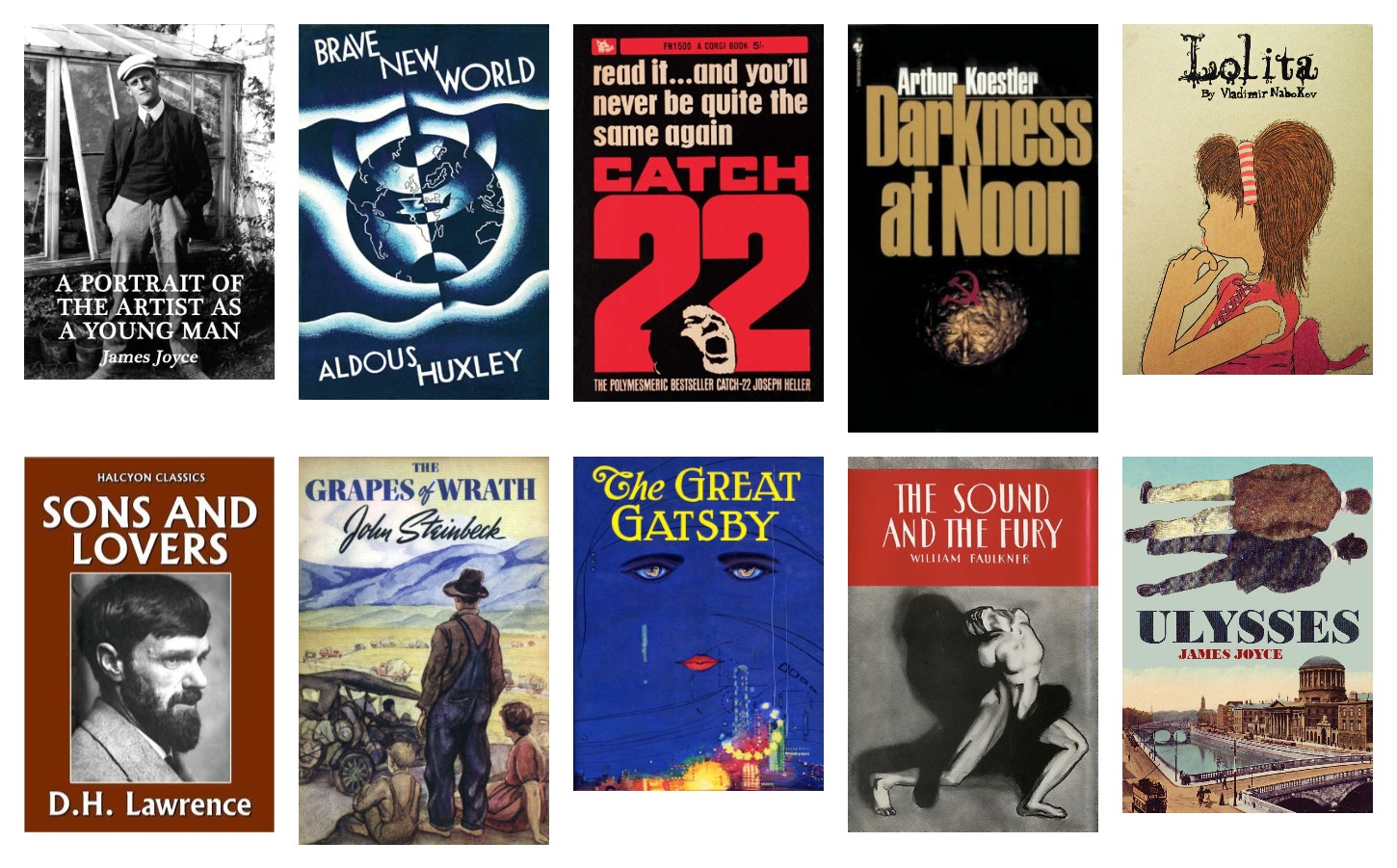 A Portrait of the Artist as a Young Man
James Joyce

Huxley´s vision of the future in his astonishing 1931 novel Brave New World — a world of tomorrow in which capitalist civilization has been reconstituted through the most efficient scientific and psychological engineering, where the people are genetically designed to be passive, consistently useful to the ruling class.

Catch-22 is like no other novel we have ever read. It has its own style, its own rationale, its own extraordinary character. It moves back and forth from hilarity to horror. It is outrageously funny and strangely affecting. It is totally original.

It is set in the closing months of World War II, in an American bomber squadron on a small island off Italy. Its hero is a bombardier named Yossarian, who is frantic and furious because thousands of people he hasn’t even met keep trying to kill him. (He has decided to live forever even if he has to die in the attempt.)

His problem is Colonel Cathcart, who keeps raising the number of missions the men have to fly.

The others range from Lieutenant Milo Minderbinder, a dedicated entrepreneur (he bombs his own airfield when the Germans make him a reasonable offer: cost plus 6%), to the dead man in Yossarian’s tent; from Major Major Major, whose tragedy is that he resembles Henry Fonda, to Nately’s whore’s kid sister; from Lieutenant Scheisskopf (he loves a parade) to Major — de Coverley, whose face is so forbidding no one has ever dared ask him his first name; from Clevinger, who is lost in the clouds, to the soldier in white, who lies encased in bandages from head to toe and may not even be there at all; from Dori Duz, who does, to the wounded gunner Snowden, who lies dying in the tail of Yossarian’s plane and at last reveals his terrifying secret.

Catch-22 is a microcosm of the twentieth-century world as it might look to someone dangerously sane. It is a novel that lives and moves and grows with astonishing power and vitality. It is, we believe, one of the strongest creations of the mid-century.

As revealing today as when it was first published, this brilliant novel by the author of Picture This expresses the concerns of an entire generation in its black comedy. World War II flier John Yossarian decides that his only mission each time he goes up is to return—alive!

Set during Stalin’s Moscow show trials of the 1930s, Darkness at Noon is an unforgettable portrait of an aging revolutionary, Nicholas Rubashov, who is imprisoned and psychologically tortured by the very Party to which he has dedicated his life. As the pressure increases to confess to committing preposterous crimes, he re-lives a career that embodies the terrible ironies and human betrayals of a totalitarian movement masking itself as an instrument of deliverance. Almost unbearably vivid in its depiction of one man’s solitary agony, Darkness at Noon asks questions about ends and means that have relevance not only for the past, but for the perilous present. It is, as the Times Literary Supplement has declared, “A remarkable book, a grimly fascinating interpretation of the logic of the Russian Revolution, indeed of all revolutionary dictatorships, and at the same time a tense and subtly intellectualized drama.”

Humbert Humbert is the one who tells us the story. From an insane asylum. He’s a child molester and, ultimately, a murderer. Why on earth should we take his word for how it happened?

This, in fact, is the real story of Lolita. The novel is about the ways in which a reader can be manipulated to feel sympathy for — even to identify with — the most horrifying person imaginable. That early readers of the novel were so shocked by Dolores’s behavior — so shocked, in fact, that governments moved to ban the book — is precisely Nabokov’s point: Rather than acknowledge the ultimate evil that lies under the otherwise charming persona, we as a culture are more inclined to turn him into a tragic hero, a victim.

Called the most widely-read English novel of the twentieth century, D. H. Lawrence’s largely autobiographical Sons and Lovers tells the story of Paul Morel, a young artist growing into manhood in a British working-class community near the Nottingham coalfields. His mother Gertrude, unhappily married to Paul’s hard-drinking father, devotes all her energies to her son. They develop a powerful and passionate relationship, but eventually tensions arise when Paul falls in love with a girl and seeks to escape his family ties. Torn between his desire for independence and his abiding attachment to his loving but overbearing mother, Paul struggles to define himself sexually and emotionally through his relationships with two women—the innocent, old-fashioned Miriam Leivers, and the experienced, provocatively modern Clara Dawes.

The Grapes of Wrath
John Steinbeck

First published in 1939, Steinbeck’s Pulitzer Prize-winning epic of the Great Depression chronicles the Dust Bowl migration of the 1930s and tells the story of one Oklahoma farm family, the Joads—driven from their homestead and forced to travel west to the promised land of California. Out of their trials and their repeated collisions against the hard realities of an America divided into Haves and Have-Nots evolves a drama that is intensely human yet majestic in its scale and moral vision, elemental yet plainspoken, tragic but ultimately stirring in its human dignity. A portrait of the conflict between the powerful and the powerless, of one man’s fierce reaction to injustice, and of one woman’s stoical strength, the novel captures the horrors of the Great Depression and probes into the very nature of equality and justice in America. At once a naturalistic epic, captivity narrative, road novel, and transcendental gospel, Steinbeck’s powerful landmark novel is perhaps the most American of American Classics.

The Great Gatsby, F. Scott Fitzgerald’s third book, stands as the supreme achievement of his career. This exemplary novel of the Jazz Age has been acclaimed by generations of readers. The story of the fabulously wealthy Jay Gatsby and his love for the beautiful Daisy Buchanan, of lavish parties on Long Island at a time when The New York Times noted “gin was the national drink and sex the national obsession,” it is an exquisitely crafted tale of America in the 1920s.

The Great Gatsby is one of the great classics of twentieth-century literature.

The timeless story of Jay Gatsby and his love for Daisy Buchanan is widely acknowledged to be the closest thing to the Great American Novel ever written.

The Sound and the Fury
William Faulkner

The Sound and the Fury is the tragedy of the Compson family, featuring some of the most memorable characters in literature: beautiful, rebellious Caddy; the manchild Benjy; haunted, neurotic Quentin; Jason, the brutal cynic; and Dilsey, their black servant. Their lives fragmented and harrowed by history and legacy, the character’s voices and actions mesh to create what is arguably Faulkner’s masterpiece and  one of the greatest novels of the twentieth century.

Ulysses chronicles the passage through Dublin by its main character, Leopold Bloom, during an ordinary day, June 16, 1904. The title alludes to the hero of Homer’s Odyssey (Latinised into Ulysses), and there are many parallels, both implicit and explicit, between the two works (e.g., the correspondences between Leopold Bloom and Odysseus, Molly Bloom and Penelope, and Stephen Dedalus and Telemachus).